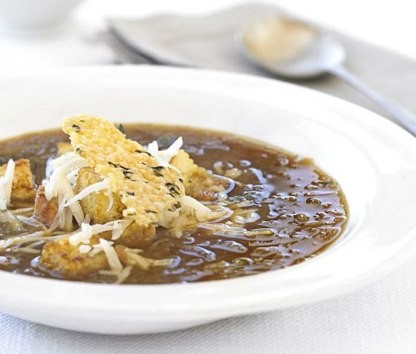 
In a big sauce pan melt the butter, add the onions, and sauté, stirring occasionally until golden / dark brown. Add the Calvados and let simmer for 2 minutes. Add broth and potatoes, uncovered and simmer for ½ hour or more. (The longer you simmer the more concentrated the flavors.)


In the mean time, toast the slices of bread in the oven (not the toaster) so they get crispy and dry all the way through.


When the soup is done cooking and you are ready to eat, ladle the hot soup into bowls that are broiler safe. Add 1 slice of toasted bread per bowl. Top with grated Gruyere cheese. Put in the oven and broil until the top is lightly golden.